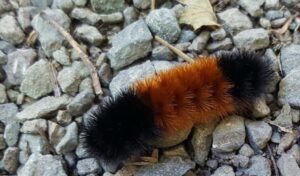 Last month, I spotted a woolly bear caterpillar climbing up the side of my house. Beyond being fascinated by his lovely coat of fur and the undulating wave motion that produced his forward movement, I was mostly curious about what he was doing and where he was going. As I stroked his back, he curled into a ball and fell into my hand. Once comforted, I returned him to the brick wall and watched again as he wiggled away.

A month earlier, while riding bikes through the parkway, a giant leaf – the size of my head (if you can imagine) – managed to plant itself into the spokes of my back tire. With each revolution, it clicked as it passed and brushed against the frame. I was not annoyed. Instead, I wondered how long it would stay there as I continued riding along the bike trail. As it turns out, it not only came home with me, but it remained there for several more bike rides until finally, at my wife’s request, I removed it from its resting place and set it free on the front lawn.

I will openly admit that I love little more than going on wanderings with my grandchildren, nieces and nephews, whose only purpose is to wonder about all the things we see and many that we do not.

“What would happen if that giant branch just fell on our heads?”

“How long do you think it would take to cross the creek in a rainstorm?”

“If we were stranded in an apocalypse, what should we do first, find shelter, food or start a fire?”

And those are just the questions I have; you cannot imagine what the kids ask.

I recently heard Walter Isaacson talking about Einstein and DaVinci and Steve Jobs and Jeff Bezos. He said the thing that separated them from everyone else was not their intelligence, but rather their endless sense of curiosity. And he advised “Never outgrow your wonder years.”

Which of course made me wonder, what happens to children as they age that they stop being curious and imaginative? I suspect, having been a good Catholic school student, that teachers are part of the answer. But then too are parents and everyone over the age of 12 who has the audacity to tell children under the age of 12 to stop asking stupid questions and stop thinking about things that do not matter.

It is sad. Truly, I am sad… for every little boy or girl who ever gave up their curiosity and stopped imagining. I agree, as the Good Book says, there is a time to set aside childish ways. But being curious, wondering “what if” and “why not” are not childish endeavors.

If you can look back on this past year and not remember the last time you took a seemingly pointless walk and wondered something apparently pointless and bizarre, I encourage you to do so now. Strap on your boots and start wandering and wondering. And don’t be afraid to giggle along the way. It is good medicine for your mind and your soul.