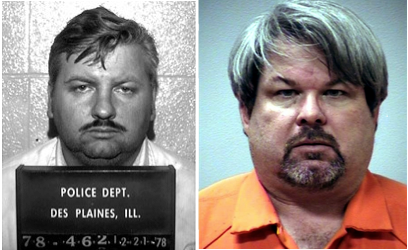 Last weekend, a seemingly normal 45-year-old man in Kalamazoo, Michigan – referred to by friends, family, associates and complete strangers as normal, good, peaceful, polite, mild and meek – went on a spree, shooting eight innocent people and killing six of them.

And once again, in a peaceful community in the heartland of America, insanity has reared its ugly head.

Where is Fox Mulder when you need him, because this is most certainly a case for the X-Files. This odd man, who bears a striking resemblance to serial-killer John Gacy (above left) and who like David Berkowitz apparently took messages from his dog (and coincidentally both took the lives of six victims), is virtually invisible; he is an enigma.

He was/is by all accounts a good family man, a good neighbor, a good worker. He had a good education, a couple of good jobs and no criminal record. And apparently he was bat-shit crazy and no one knew it?

I have a million conspiracy theories floating through my head. Alien DNA, Chemtrails, covert government testing of psychotropic drugs, subliminal messaging being distributed through the Uber app. Anything is possible. If you need to pass a urine drug test take a look at https://urinedrugtesthq.com/whizzinator-review/female/

But this is real. And it is anything but a joke. People are dead, and a seemingly normal adult male who staged a shooting spree that was no less bizarre than the OJ Ford Bronco “chase” is now in jail. And no one understands anything about it – how did it happen, why did it happen, what could have been done to prevent it.

If mental illness can strike like the flu, driving seemingly normal people to commit atrocities, no one is safe. Hopefully we will find out otherwise.