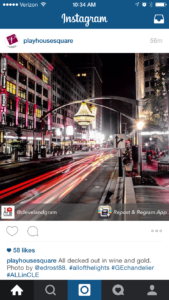 Searching #ALLinCLE on Twitter returns an abundance of tweets posted every few minutes expressing support, love and excitement for the Cleveland Cavaliers as they enter into game 4 of the NBA Finals.

And why not? The NBA Finals mean big business for Cleveland as local fans and international celebrities flash mob downtown Cleveland for a chance to share in the excitement. The tagline “all in” is bouncing across local and national media, mostly in the hands of Lebron James (and Matthew Dellavedova).

Maybe it was just started as marketing for an NBA franchise. But, it’s also so much more.

Whether you are born and raised in Cleveland or it is your adopted home, “all in” is a way to show the World what is already known locally. Cleveland has been “all in” for awhile now.

Cleveland is trending… it is a destination city. There’s a wave of excitement washing up on the shores of Lake Erie. Renovations, new businesses, hometown pride – Cleveland is a chic place to live, work and play.

Any major sporting event like this is a unique marketing opportunity. It brings positivity to a city. It enlightens those across the nation who may not know how awesome a particular city really is.

Right now, it just happens to be Cleveland. It is a well-deserved and long-awaited moment. Let’s keep relishing, Clevelanders – over the next several days and every day after that.