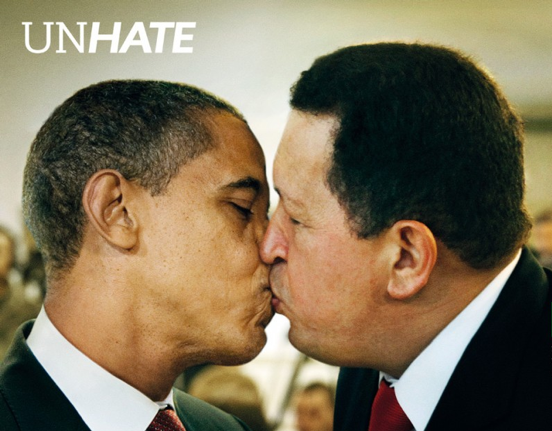 There’s this game we play at my house called: “What company was that ad promoting?”

Try it sometime.  It goes like this: “Hey, remember that Super Bowl ad about the vampire who drove his car to a late-night outdoor party and forgot to shut off his LED headlights, causing all the vampires to disintegrate?  Yeah, that was awesome.  What product was that advertising anyway?” [Spoiler alert: Audi]

Or “How about that commercial most considered the best TV spot of the Super Bowl, with the dogs racing on a track and Mr. Quiggly wearing athletic shoes and moonwalking across the finish line to Tone Loc’s Wild Thing… and he turns out to be owned by Mark Cuban? Instant classic, right? What shoe brand was that anyway? [Spoiler alert: Skechers Go Run]

In the world of advertising, funny is good, but money is better.

As for the print ad above showing world leaders in a loving embrace, yeah, that was an award-winning ad campaign.   But do you remember what company it was?