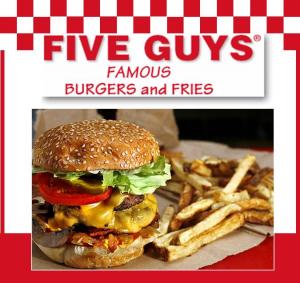 Over the past 2-1/2 years I have run more than 1,375 miles, not just to stay in shape, but to enable me to eat Five Guys burgers and fries whenever the spirit moves me.

According to Amplicate, the social media analysis firm, people who use social media LOVE fast food chains, but HATE burgers.  Subway was identified as the most loved chain, while Burger King ranked at the bottom with the most negative comments.

But then there is the annual Zagat survey of more than 6,000 fast food fans who voted Five Guys as the #1 large fast food chain and ranked McDonald’s as the second most popular mega fast food chain, followed by Wendy’s and Burger King.

So, what’s going on here?  Are consumers flocking to the burger shops in the real world and dissing them in the virtual world?  Or is Amplicate toying with our emotions by using words like LOVE and HATE, when all someone might be saying is “McDonald’s new commercials are stupid” (this Twitter message would be interpreted as a HATE vote).

Either way, I have a piece of advice I would like to offer.  Regardless of whether Zagat is providing you with the opinions of 6,000 consumers or Amplicate is interpreting the intentions of social media users, trust your own judgment.  If you like Five Guys, eat there.  If you like Subway, order up a footlong.  But make your own choices.

Consider this:  Two weeks ago, while traveling through Atlanta on business, Jennifer and I stopped at Joe’s on Sullivan for a quick dinner before heading to the airport.  The place was a dump, but Urban Spoon reports that 82% of people who voted, “liked it.”  So we stayed.  Jen ordered two seasonal beers, neither of which was available.  When her third choice arrived, the glass was dirty.  And the food was HORRIBLE on every conceivable level – undercooked, greasy, dried out, ugly. Even the napkins felt dirty.  Thank you Urban Spoon; why did we listen to you?

I don’t need surveys and social media to tell me if I should LOVE or HATE or LIKE something.  Neither do you.