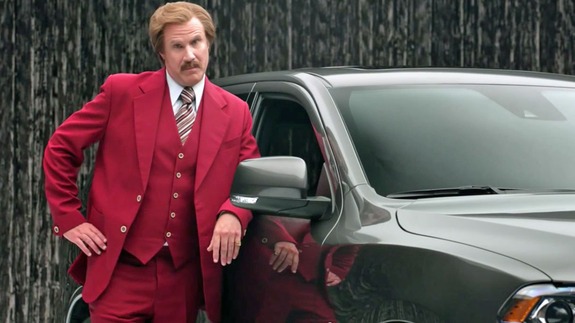 By now, we have all seen Ron Burgundy’s endorsement for the Chrysler Dodge Durango. The DreamWorks character is dressed in a loud 1970’s suit and exaggerating the need for an SUV. Advertising has expanded to Burgundy co-anchoring newscasts, a Ben and Jerry’s ice cream flavor – Scotchy Scotch Scotch – and even Ron Burgundy liquor.

So is Ron Burgundy a marketing genius? Sure, his public image might be a little flawed (he’s in a glass case of emotion, give him a break), but becoming one of the most quotable, ridiculous characters in modern-day movies might have carried him to success.

Both movies are basically 90-minute sound bites that can be sharable and easily quoted. Punch line after punch line can be seen on the Internet or heard in every day conversation. Photos of ridiculous and immediately recognizable scenes still circulate on social media 10 years after the debut of the original film.  The best part about the constant sharing is that it’s given DreamWorks a platform to build from – that they haven’t even been paying for!

Kudos to DreamWorks for capitalizing on something they knew worked. The results of the advertising and marketing are yet to be determined, but you better believe I’ll be going to see Anchorman 2 on December 18th!