Prior to marrying my husband, who is a United States Marine Corp infantry captain, Memorial Day was just another day off to me.  A day to plan picnics and spend time with friends and family.

However, after two tours in Iraq and getting ready to leave for his second tour in Afghanistan, the day has a total different meaning for me.  Having lost friends in both wars, my husband and I now know the true meaning of the day. 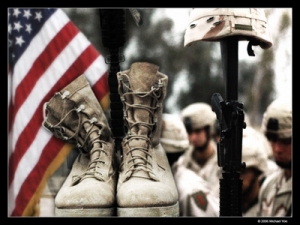 While we typically don’t attend the Memorial Day fan fare, mainly because it is too emotional, I always take a few minutes of the day to remember those who made the ultimate sacrifice and to remember the families who continue to endure the hardship.

In memory of my husband’s friends, we will never forget their courage and dedication to our country:

Here are a few ways to participate: observe the national moment of remembrance at 3 p.m. local time or fly an American flag half-staff from dawn until noon local time.

The History of Memorial Day

The following is from the History Channel web site.

Memorial Day was originally known as Decoration Day because it was a time set aside to honor the nation’s Civil War dead by decorating their graves. It was first widely observed on May 30, 1868, to commemorate the sacrifices of Civil War soldiers, by proclamation of General John A. Logan of the Grand Army of the Republic, an organization of former sailors and soldiers. On May 5, 1868, Logan declared in General Order No. 11 that:

The 30th of May, 1868, is designated for the purpose of strewing with flowers, or otherwise decorating the graves of comrades who died in defense of their country during the late rebellion, and whose bodies now lie in almost every city, village, and hamlet churchyard in the land. In this observance no form of ceremony is prescribed, but posts and comrades will in their own way arrange such fitting services and testimonials of respect as circumstances may permit.

During the first celebration of Decoration Day, General James Garfield made a speech at Arlington National Cemetery, after which 5,000 participants helped to decorate the graves of the more than 20,000 Union and Confederate soldiers buried in the cemetery.

This 1868 celebration was inspired by local observances of the day in several towns throughout America that had taken place in the three years since the Civil War. In fact, several Northern and Southern cities claim to be the birthplace of Memorial Day, including Columbus, Miss.; Macon, Ga.; Richmond, Va.; Boalsburg, Pa.; and Carbondale, Ill.

In 1966, the federal government, under the direction of President Lyndon Johnson, declared Waterloo, N.Y., the official birthplace of Memorial Day. They chose Waterloo—which had first celebrated the day on May 5, 1866—because the town had made Memorial Day an annual, community-wide event during which businesses closed and residents decorated the graves of soldiers with flowers and flags.

By the late 1800s, many communities across the country had begun to celebrate Memorial Day and, after World War I, observances also began to honor those who had died in all of America’s wars. In 1971, Congress declared Memorial Day a national holiday to be celebrated the last Monday in May. (Veterans Day, a day set aside to honor all veterans, living and dead, is celebrated each year on November 11.)

Today, Memorial Day is celebrated at Arlington National Cemetery with a ceremony in which a small American flag is placed on each grave. Also, it is customary for the president or vice-president to give a speech honoring the contributions of the dead and lay a wreath at the Tomb of the Unknown Soldier. About 5,000 people attend the ceremony annually.

Several Southern states continue to set aside a special day for honoring the Confederate dead, which is usually called Confederate Memorial Day.