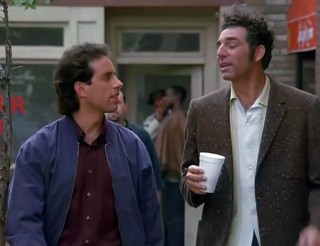 Remember that classic Seinfeld episode in which Java World offers Kramer free coffee for life to settle a lawsuit?  Poor Cosmo had no idea they were also prepared to give him $50,000.

And eventually the effects of all that caffeine forced Kramer to swear off the java juice, netting him a fairly valueless settlement.

Which brings us to the story of George Ramsey the Cleveland hero.

Unlike the Seinfeld sidekick whose settlement allowed him free coffee at any location around the world, George Ramsey can only check in at a dozen locations in Ohio and one in Pennsylvania.  And he can only get a free McDonalds burger “whenever he wants one.”  No word on the fries or drinks or the ability to super-size.

Not to look a gift horse in the mouth, because the gesture is a nice one, but considering what George Ramsey did, it just feels like he deserves something more substantial than a beef patty on a bun.

And though I am certain he is grateful to the participating eateries, for my part, I am not “lovin’ it.”