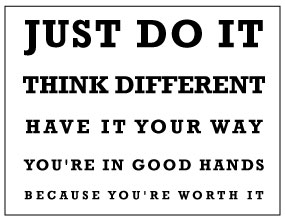 The perfect tagline – the one that endures, engages and encourages – could be considered marketing nirvana. However, when you delve deep into the study of taglines there is discrepancy on its benefits.

For some companies, the tagline becomes the core representation of the brand but for other just as successful companies, the tagline is nonexistent (just think about Google). There is also inconsistency with the science behind what should make up a tagline. Some are short, concise statements while others are complete sentences.

Let’s pause for a minute. Step away from the computer and write down with a pen and paper 5 company taglines that you pull strictly from memory.

Think Different.
Just Do It.
Because You’re Worth It.
What would you do for Klondike bar?
There’s Some Things Money Can’t Buy. For Everything Else There’s Mastercard.

These prevalent taglines range from 2 to 11 words. There is clearly no equation to what a tagline should be or if a company needs a tagline at all. Can you name 10 taglines? Or, how about any taglines for companies that are relevant to your daily life?

There’s also some debate as to whether taglines have any meaning to the consumer. According this 2015 AdAge article, what’s missing in most taglines is motivation – they seldom provide a reason for buying the brand.

However, some research does support the use of a tagline. One study suggests that taglines not only have an impact on brand perception but they also help to create key brand associations with the customer (using Kit Kat as an example).

At the end of the day, we must think beyond taglines and instead reveal the right marketing mix for the company and use repetition with those key tools in a way that reaches the heart of the customer. Perhaps it’s the culture (Starbucks), perhaps it’s the campaign (Chick-fil-A), maybe it’s a logo (McDonalds) or it could be a tagline (Nike). But most important, it is the product or service that makes a company. Everything else is a value add.