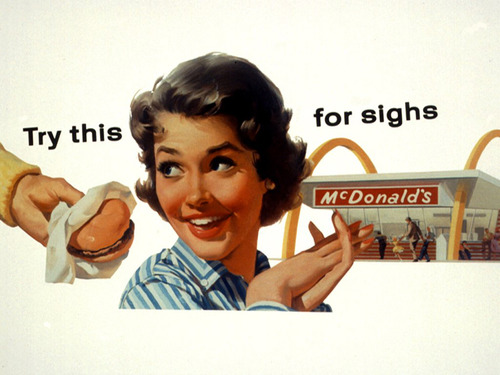 Once upon a time, McDonald’s was the king of fast food. In my opinion, it owed that lofty position to three primary factors:

2.  Convenience: The golden arches were open from sunrise to moonrise – breakfast, lunch and dinner – and were located on almost every street corner.

3.  Happy Meals: They were the TV set of their time, keeping kids occupied and sedated for hours… and sometimes days.

But times changed and the big cow did not change with them.

McDonald’s clung to value meals for way too long, shifting products and squeezing prices until even the cheapest American realized that sometimes a deal isn’t a deal. As for convenience, well that ship also sailed decades ago as more and more chains and independent competitors popped up next door and across the street from McDonald’s, offering breakfasts, lunch, dinner and late night fare. And finally, the parents and kids who fell in love with Happy Meals eventually outgrew them. Plus, just like Cracker Jacks before them, MCD learned you can only cut back so much on toy quality before you become a laughing stock with your customers.

And so, McDonald’s has become a mere shadow of itself. And it is hoping that a new CEO (Steve Easterbrook) and a new global CMO (Sylvia Lagnado) can magically transform this faltering behemoth into a new (or renewed) fast food leader.

I have no idea if such a thing is even possible. Consider the likes of Kentucky Fried Chicken and Manners Big Boy and Pizza Hut and the hundreds of others who rose to greatness, only to lose their way and their position of leadership.

So to Steve and Sylvia, I wish you great luck and a few well-intended suggestions:

1.  Decide who you want to be and be the best you that you can be.

2.  Focus first on the food and the service.

3.  Build on the nostalgia, but don’t rely on it for too long.

4.  Use your marketing to re-introduce McDonald’s to the marketplace, not to brag about how wonderful you are… McDonald’s was always a member of the family, not a guest at the front door.

5.  Remember the words of your founder: “We provide food that customers love, day after day after day. People just want more of it.”

And here is a challenge: Lure me back as a customer who stopped entering the golden arches nearly a decade ago.