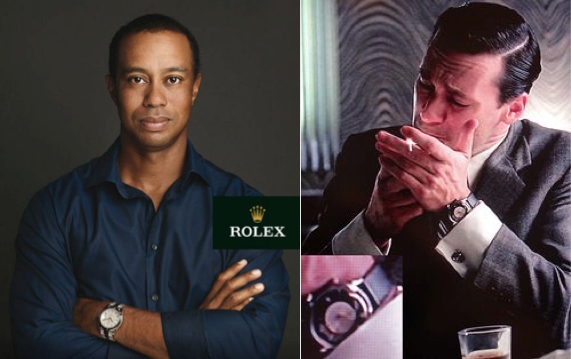 So the final season of Mad Men appeared in early April with a new Accutron spot as its focal point.  Don Draper is on the outs with SC&P (though he is still a partner).  Meanwhile, business has never been better for Freddy Rumsen, who is sitting before Peggy Olsen and making his pitch for the new Accutron campaign.

You know, watching Freddy, that none of this makes sense. His copy, his delivery, his emotion is pure Draper… and Freddy is a bit of a schlub. But he is also an exceptional actor, and he is reeling in Peggy, hook, line and sinker. And now we are all waiting with bated (baited) breath to hear his final words:

“It’s not a timepiece,” he concludes about this accurate, steampunk watch, “it’s a conversation piece.”

You actually need a moment when he is finished… it’s that evocative.

And then I remembered something. Another watch commercial featuring another really cool guy. And interestingly, this spot is almost entirely shot in black and white, with just a hint of color on the main character and his watch.

And like the Accutron watch commercial, it starts slow and builds to a crescendo and a final, evocative tagline:

The really interesting thing is that this Rolex commercial was created three years ago. And the Accutron commercial – though it is set in 1969 – was created this year. I’ve read several articles about this Mad Men episode, but none that eludes to the connection between a fallen Don Draper and a fallen Tiger Woods… or a made up Accutron ad that sounds an awful lot like a real Rolex ad.

I really don’t have a point here. As any good marketer can tell you, it is our responsibility to steal good ideas. Art imitates life and vice versa. But I think this is a case of art imitating art imitating life. And I don’t know what to make of that.