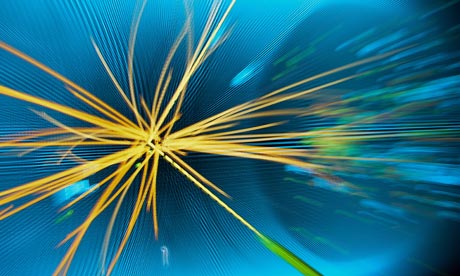 I am no scientist.  Just ask my son the scientist.

And I am no Facebook advocate. Just ask Mark Zuckerberg.

Still, all the recent excitement over the God particle got me thinking how awesome it must be to be a scientist and to know with almost complete certainty that you’ve actually achieved something real.  Think about it.  Peter Higgs hypothesizes the existence of this particle, then PROVES it through experiments.

According to the LA times, two teams reported independent results that suggested the existence of a previously unseen subatomic particle with a mass of about 125 billion to 126 billion electron volts. Both groups got results at a “five sigma” level of confidence — the statistical requirement for declaring a scientific “discovery.”

“The chance that either of the two experiments had seen a fluke is less than three parts in 10 million,” said UC San Diego physicist Vivek Sharma, a former leader of one of the Higgs research groups. “There is no doubt that we have found something.”

No doubt.  How awesome would it be to run a Facebook social media campaign, hypothesizing that it will achieve something, then look at your results (traffic, likes, talking about this, total reach) and be able to conclude with five sigma certainty that you actually achieved something.

That’s the problem with marketing.  You can be strategic.  You can apply a scientific approach.  You can measure for and document results. But you will never ever get results with a sigma five level of confidence.

Face it (and if you wish, you can even Facebook it), at the end of the day, we are not scientists. And I can live with that.  After all, it took Higgs nearly 50 years to prove his theory, and very few clients have the ability, desire or luxury to invest that kind of time to sell a product.