More than 30 million Americans sat home on Monday to watch American Idol’s two-hour premier. That is a lot of 18-49 year olds who you would think could find better things to do with their time than watch TV… like surf the net or text or tweet or work out at the gym as part of their 2010 resolution.

Or maybe – just maybe – they were doing all of those things at the same time. We are after all a multi-tasking society of obese consumers who love to watch train wrecks and be the first to break news (General Larry Platt). 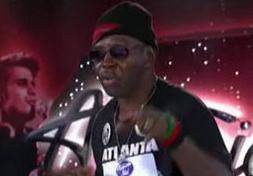 And, oh yeah, I was one of them. I spent a good 90 minutes in front of my TV last night, watching the beginning of General Larry Platt’s career, while texting my niece and writing this blog entry.

For sure we love to be entertained. We love watching average young (and old) Americans singing their hearts out for a chance at fame? And we also love peeping on the delusional misfits. And we can’t wait to see what Simon is going to say or do next.

Meanwhile, just a few stations down the dial, the Public Broadcasting System has Alan Alda in an educational and intellectual discussion with scientists asking and attempting to answer the question: What is the nature of human uniqueness?

And for a moment I feel a twinge of guilt. Perhaps I should be watching PBS and supporting the cause. And then I realize that I am watching American Idol in pursuit of the answer to the same question.