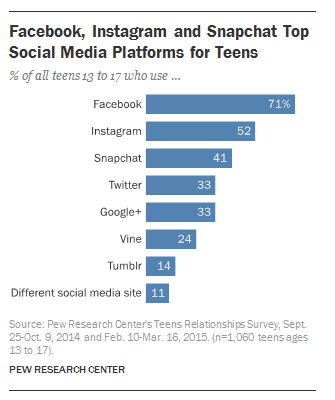 Today, Pew Research Center published its findings on U.S. teen’s use of social media (ages 13-17) based on a survey that was conducted beginning Fall 2014 and ending just this past month.

While this research covers the landscape of technology use in regards to what teens are using – including breakdowns based on socio-economic status and race – it does not delve into how teens are using social or what they’re using it for either primarily or secondarily. So the data is hardly an indicator of what content resonates and encourages engagement with teens on social. But in terms of confirmation of online accessibility and platform usage, the data is golden.

Here are the highlights, but we highly recommend reading the study for all the details and data. Even if teens are not currently your target audience, get in tune with this generation and its use of technology. It’s only going to continue to grow, change and evolve with time.