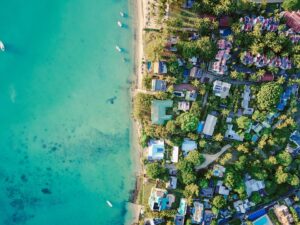 If you could have any superpower, what would it be? For some people, including myself, it would be the ability to fly. To get that bird’s eye view, that distinctive angle that so many photographers and filmmakers seek to find. A little over 5 years ago, it took helicopters, planes, hot air balloons, etc. to get that perfect sky shot. In 2013, everything changed.

With the release of the DJI Phantom drone series, suddenly we all had the ability to fly. for just a few hundred bucks, anyone could capture that highly sought after bird’s eye view. With a twist of the thumb and spin of the propeller, you could send a camera straight up into the sky, hundreds of feet into the stratosphere.

But now that almost anyone can become an aerial photographer, I have to ask: what’s all the hype? Some will simply say, “because it looks cool,” and indeed it does. It allows companies to show off their products from an entirely new angle, literally. It’s like you used to tell your parents, “everyone’s doing it.”

But the real question is, will it possess the same allure in the next few years, after everyone has done it?  Will “droning” be the new norm? Some will tell you the 21st century has already become the age of the drone.

As for me, I predict this new view from the heavens will become the new norm in photography, videography and film. In the meantime, I suggest you go pick up a drone and see for yourself what it feels like to fly.